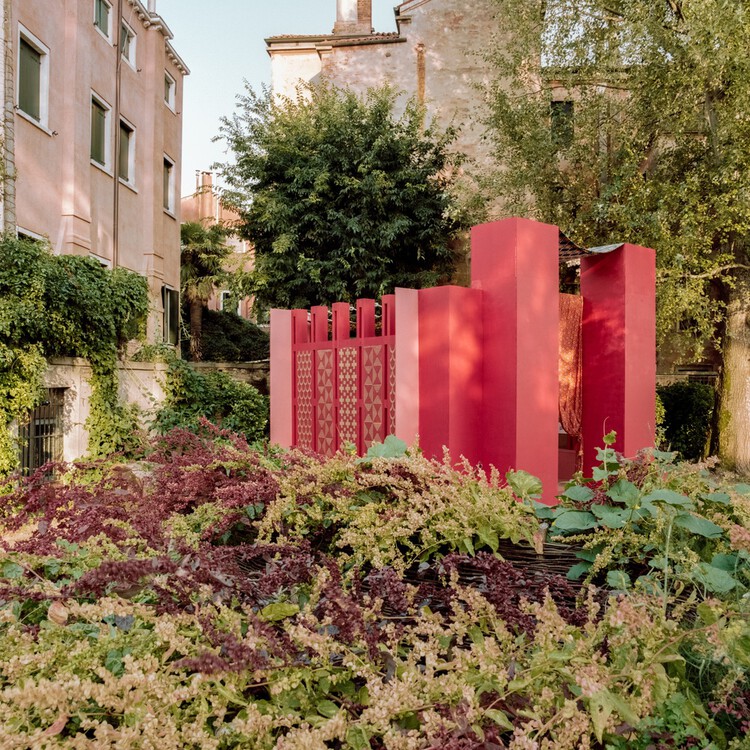 As ornament was rejected and the architectural style that came to be known as Modernism entrenched itself into the canon, early 1931 saw what is arguably the most extreme example of an oversimplified African architectural representation at an exhibition – the Paris Colonial Exhibition. A six-month show, it was an attempt to demonstrate the strength of European colonial policy, exhibiting in colonial pavilions supposedly “authentic” environments from the colonies in addition to indigenous peoples and artifacts from colonial territories.

Within this set-up, pavilions “from” African colonies were designed by architects from the colonial metropole, in a stylistic mishmash of European and African vernacular architecture. Present-day Democratic Republic of Congo, under Belgian rule at the time, had a pavilion designed by Belgian architect Henri Lacoste that was this disorganized attempt at representing the “authenticity” of the Central African colony. Yombe textiles from the Yombe people residing in the colony were used in the mosaic floor of the main pavilion, but the pavilion saw motifs sourced from cave paintings sourced from South Africa and present-day Zimbabwe, and further references to artifacts from Gabon and Ivory Coast. These sources of inspiration were evidently not contextual, and instead, aesthetic choices were undertaken to invent, for the exhibition, a “Congolese” architectural style.

The Laboratory of the Future: The 2023 Venice Architecture Biennale Announces Title and Theme of its 18th Edition

The Cameroon-Togo pavilion in the same exhibition very much followed a similar pattern, featuring huts from the colonies stylized by French architects. Here, the architecture was a backdrop for a visitor experience that saw a boat ride on a nearby lake intended to mimic the experience of being rowed on the Wouri River in southwestern Cameroon. The pavilions – with the main one being a large hall 500 square meters in area and 28 meters high, featured wax reproductions of indigenous works of art in addition to dioramas by painter Joseph de La Nézière – who painted scenes of France’s colonies.

Once again, the intent was to ostensibly attempt to present an “accurate” and “realistic” version of the architecture of an African colony, that relied on improvisation that sought to reinforce cultural superiority from the metropoles over the colonies.

Adjacent to the architectural sphere, the art world has seen, relatively recently, African pavilions fail to get the representation they deserve. While Angola’s pavilion at the 2013 Venice Biennale featured an installation by Angolan photographer Edson Chagas winning the Golden Lion prize, the exhibition saw criticism leveled at Kenya’s contribution, as it featured only two Kenyan artists out of the twelve invited to participate. The Kenyan pavilions in subsequent biennales have rectified this – featuring artists and art that is more representative of the Kenyan art scene.

But African perspectives have sought to pave a path forward in architecture exhibitions, and overturn the legacies of one-dimensional African representation. Kenyan studio Cave Bureau’s Obsidian Rain, for the 2021 Venice Architecture Biennale, features a section of the Mbai cave in Kenya, used as a communal space in the mid-twentieth century by freedom fighters to plan anti-colonial resistance. A perspective such as this would have been largely out of the imagination in the exhibition arena ninety-plus years ago, as displays such as the British Empire Exhibition of 1924 and the Paris Colonial Exhibition would have endeavored to deter a truly representative exhibition of the colonies, let alone anti-colonial resistance.

As the 18th International Venice Architecture Biennale draws closer, curated by Ghanaian-Scottish architect Lesley Lokko, its theme of considering Africa as a “laboratory of a future” is a timely one, as practitioners, artists, and designers around the globe seek to exhibit a multiplicity of African perspectives, and reject imposed viewpoints of the continent.

Editor’s Note: This article was originally published on October 21, 2022.