At Beta 2022, the “Another Breach in the Wall” Aims to Expose Loopholes and Empower Citizens

“Another Breach in the Wall’ was the chosen theme for the main exhibition presented at Beta 2022, the Timișoara Architecture Biennial, which ran from 23 September to 23 October 2022. Curated by Daniel Tudor Munteanu and Davide Tommaso Ferrando, it aimed to explore the concept of loopholes, a term referring both to inadequacies in a set of regulations and an arrow slit in a defensive wall. The exhibition aimed to inspire action an empower citizens to appropriate the urban fabric by exposing submissive urban strategies. The projects and actions presented were selected based on their potential to create novel urban spaces by questioning the laws that regulate the use of public space. 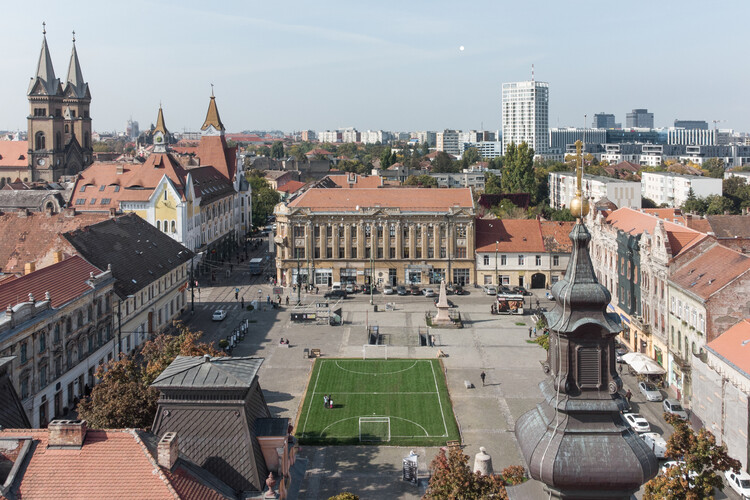 The exhibition aims to paint a raw and honest image of the city and understand the potential hidden along its alleys and overlooked passages. To achieve this, a geometric grid was layered over the city fabric, creating random intersection points. A 23 kilometers long trail connects these points to create a serendipitous path. Every point along the path received a small installation intending to expose a perhaps overlooked corner of the city. Before the exhibition’s opening, volunteers followed this path, leaving behind them a trail of dripping yellow paint. The marking sparked the imagination of the citizens, who speculated on its purpose before the exhibits were revealed.

Temporary, but with Long-Lasting Effects: 6 Ways in Which Architecture Festivals Can Revitalize a City

Along this line, several pavilions were dedicated to fictional micronations, groups of people connected through a commonality, inhabiting a separate layer within the city’s tissue. The theme of the micronations was used as a mechanism for narrating the diversity of the urban environment. One of the installations, State of Hope by Anca Munteanu Rimnic, used the exterior of the penitentiary to create a public stage. Abrupt Architectura’s intervention creates a surreal realm within an anonymous square. Likewise, Zeppelin proposed the construction of an anti-park, while the students of Timișoara’s Faculty of Architecture have formed Bedonia, an alternative socializing exterior space furnished like a dorm room.

When the trail reaches the Fabric neighborhood, the yellow line leads visitors to the entrance of an unused structure, an Art Noveau/Secession building officially known as the Ștefania Palace but colloquially referred to as the Monkey House. The name is inspired by the statues adorning one of the facades, monkeys and bears holding shields and documents, allegedly representing the local politicians who demanded to be portrayed on the once publicly owned building. Once inside, the line connects a labyrinth of spaces that take on different identities: a library, bar, classroom, and an indoor extension of the exhibition. The curators hope that this intervention will become the first step toward a complete rehabilitation of the building.

The year 2022 has been witnessing a resurgence of biennials, triennials, and design weeks as the cycle of architecture events shows signs of recovering after the two years of disruptions due to the pandemic. Check out the list of the most anticipated architectural events planned for 2023, from the Venice Architecture Biennale to the long list of events happening in Copenhagen, the 2023 UNESCO World Capital of Architecture.