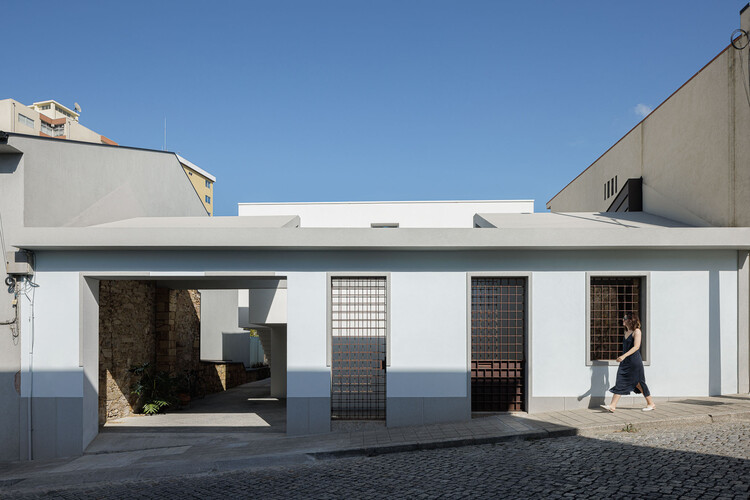 Text description provided by the architects. A well-established urban residential area in the city of Santo Tirso – The intervention is inevitably a reflex response to this complex and challenging context. Urban plot, confined between neighbors and whose visible confrontations had little or nothing significant from the landscape point of view.

The pre-existence, heavily degraded and with little constructive value, lived in the typical and uninteresting duality between the street and the back courtyard. Moving away from this typology represents an attitude that is both logical and challenging, but above all, necessary and effective.

The intervention starts from a massive block that, impertinently, detaches from the limits and mimics the land plot outline. From here, by subtraction, the voids are defined, and the program is intuitively accommodated between patios in a constant refusal of a direct relationship with the exterior perimeter.

The house is designed in a complex balance between the creation of a dense and closed fortress and the reinterpretation of the typical patio house, looking for a protected oasis, in its intimate relationship with the sky. The name – Forte – denounces the mandatory theme of privacy, while the volumetric design reveals the essential strategy of capturing light and ventilation for the space, in an unpretentious and assumed inspiration in the Islamic culture.

The old facade, an identity element of the pre-existence, is one of the few remaining elements of the old set. With the necessary functional changes, it was restored and rehabilitated as an element of cohesion and framing with the adjacent urban fabric, reducing the intervention urban impact on the street.

The clients, and friends, were looking, on a plot with clear limitations of space and privacy, for a house that was at the same time, extremely pragmatic and flexible, but also sensitive and surprising. The answer, matured in an intense way, has a character strongly linked to the resolution of the challenge, without ever letting go of its personality and desire to create emotive spaces and moments, being the light, as manipulated matter, the main protagonist of these moments.

There are spaces that cannot be explained by words, they are felt. Absurd functionalism and easy fashion, tend, little by little, to asphyxiate the sentiment in architecture. Hopefully not here, at Forte.
Tiago Pedrosa Martins