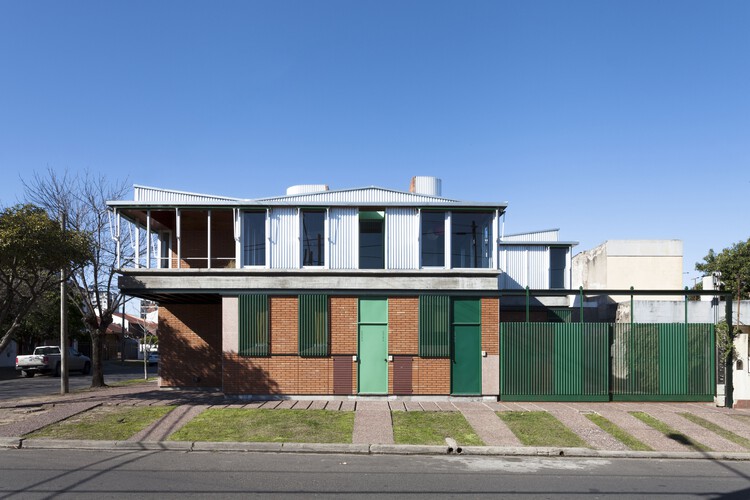 Text description provided by the architects. The project transforms a house from the early 70’s into a multi-family dwelling with 4 functional units. The project takes up the tectonic-material model of the traditional guardhouses, organizing the extension from the assembly of a light structure on the existing wall building.

A reinforced concrete beam-seat solves, as a cornice, the transition between the existing building and the added construction, framing the development of the upper level and introducing the characteristic proportion of railway booths where the walls predominate over the light.

The metal structure on the upper floor supports the light double-butterfly roof that energizes the interior spaces. The enclosure is resolved by alternately arranging natural aluminum windows and galvanized sinusoidal sheet metal panels.

The regular rhythm of the upper part extends to the existing one, reorganizing new openings on the perimeter masonry. This vertical coordination is accentuated by the perforated sheet metal shutters and the green canvas awnings, which introduce chromatic continuities between the two levels and refer to the traditional colors of the railway constructions.

The coverings -red brick slats, rustic granite and washed stone concrete- reinforce the tectonic and earthy character of the ground floor while emphasizing the contrast of colors and textures with respect to the smooth and cold palette of the upper part, characterized by aluminum and zinc, which with their gray and light blue tones allude to a light and airy condition.