How to Frame Dawn in England’s Cathedrals

Using only natural light to document English cathedrals can turn into a logistical and technical challenge. However, Peter Marlow’s photography has resulted in a remarkable series of iconic spiritual sites whose contemplative atmosphere is rarely accessible to others. Looking east with the camera towards the nave as the dawn light streamed through the main window opens a purist and mystical perspective to the time when these sacred structures were erected. 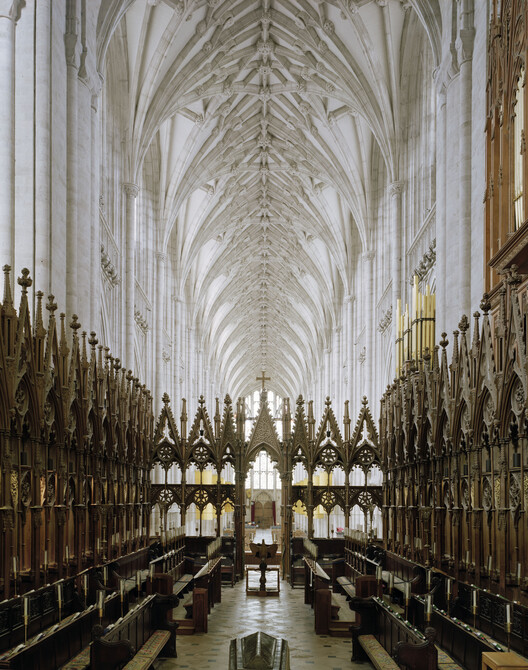 The interview with Fiona Naylor, Peter’s partner as well as director of the Peter Marlow Foundation, explores the aesthetic, context, and challenges of the exceptional cathedral documentary.

Peter Marlow (1952-2016), an internationally recognized photographer started as a photojournalist before he became interested in architecture in his later years and focused on cathedrals. Photographers of English cathedrals before Marlow has trodden a path between architectural illustration and emotive expression, remarks Martin Barnes, Senior Curator of Photographs at the Victoria and Albert Museum, London. Instead of illustrating impressive exterior structures, Marlow concentrated on the most sacred place and captured the altar in the context of the nave. Barnes observes a link between Marlow’s approach with the strict, repetitive perspective in the same light with the renowned photographic work of the Bechers, Bernd (1931–2007) and Hilla (1934-2015), who investigated forms and functions in vernacular and industrial architecture. Without a comprehensive knowledge of architectural history, Marlow offers a fresh, but analytic view of light and space.

TS: In which way has your late partner Peter Marlow altered your perception of architecture and photography?

FN: Peter was a maker, practical, and had an innate understanding of how things go together from engineering to architecture. We worked together on many projects and I wouldn’t say that partnership changed my perception of either discipline but it did add more knowledge, understanding, and respect for the power of a great image and the story behind it.

TS: How has Peter Marlow’s understanding of architecture changed from photographing people in the urban context to his late work about sacred halls for spirituality?

FN: Peter was a social documentary photographer passionate to document real lives and tell important stories and documenting history – Cathedrals are one strand of this journey and he did not stop photographing people during the project in fact the other projects he was working on at this time were totally people focused. His interest lay in the power of architecture to affect people and to capture that in the images – cathedrals were generally built to bring awe and wonder to the people in the past – he wanted to capture that moment.

TS: What were his main technical challenges for capturing the naves at dawn?

FN: Timing and lighting were critical – negotiating with the Cathedral teams to have every single electric light turned off was often challenging but an important part of the process – to complete this type of project involves enjoying people and the journey. He would set up the large plate camera he used in the center line of the Nave at the same height with a ladder to reach the perfect position. When you see the images the taxonomy of the rigor of always the same proportion is compelling. The long exposures required no people in shot but he also wanted that dawn moment when the daylight creeps through the East window which in all cathedrals has the same orientation.

TS: Why has Peter changed from his early black-and-white photography to color for the cathedral series?

FN: Peter started to work in color in 1992/93 and as his work evolved he almost completely shot in color in 2000. There isn’t a right and a wrong between black and white and color and sometimes after 2000 he shot in B&W – cathedrals clearly were for him a color project.

TS: Which cathedrals represent for you the strongest contrast in the way how the morning light enters the nave?

FN: Winchester and Coventry – a simple matter of time and traditional convention contrasted with architectural intent. Winchester like most early Anglican cathedrals is a multi-layered building constructed, reconstructed, and added to from the tenth century onwards – the Fourteenth century East window bookends the Romanesque Nave to fill the elevation with light. This would probably be the largest expanse of glass people would ever see with the lightest structure – it would be and still is overwhelmingly beautiful but for the congregation of the day at dawn prayers are also a reminder of the power and where it lay.

Coventry in contrast plays with light to benefit and balance the whole volume of the internal spaces. The Nave faces the sublime Graham Sutherland tapestry of Christ and is lit by side windows that are not immediately visible. The East window is actually on the ‘side’ of the cathedral and brings light in close to the entrance -the experience is so much more holistic – your attention is drawn to the whole not a single focus point.

TS: Why was it so important for Peter to receive only the morning daylight when looking east towards the main window in the cathedrals?

FN: The majority of Anglican cathedrals and their east windows are on the same axis so by the simple device of always arriving in the dark, setting up, and then waiting for that magic dawn light to appear he achieved consistency and equality to the images allowing their architectural differences to be apparent but also capturing their similarity – he penetrated the veil of their physical presence.

The next stage of exhibitions of ‘The English Cathedral’ are listed here.
The book about the Anglican cathedrals includes an introduction by Senior Curator of Photographs at the Victoria and Albert Museum (V&A) Martin Barnes and a summary of each cathedral’s interior by architectural historian John Goodall.

Light matters, a column on light and space, is written by Dr. Thomas Schielke. Based in Germany, he is fascinated by architectural lighting and works as an editor for the lighting company ERCO. He has published numerous articles and co-authored the books “Light Perspectives” and “SuperLux”. For more information check www.erco.com and www.arclighting.de.