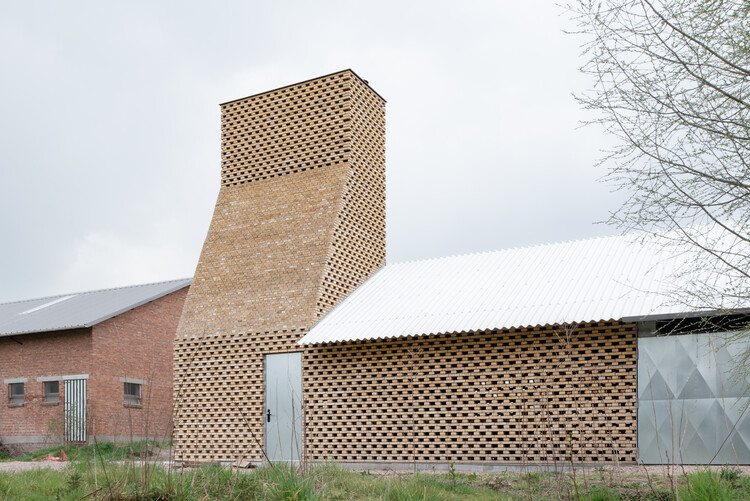 Text description provided by the architects. The master plan for the regional center ‘Huysmanhoeve’ in Eeklo is based on the typical typology of the moat farm. This forms the fundament to develop Huysmanhoeve as an open, flexible, and multi-purpose gathering place. This project is about 4 buildings on the site. Two existing barns are renovated, and two new structures are added to this historical site.

The existing transverse barn will house the new cafeteria. We strive to preserve the layered character of the barn. This consists of the restoration of the wooden truss structure and the complete outer shell. In the function of the new program, 2 interventions were required. Both of them are in clear contrast with the existing architecture: First, a glass facade divides the inside into 2 parts: a covered outside space and a conditioned indoor space. Secondly, a new chimney is added. This element contains all the new building techniques. The design and materialization of this object differ from the existing building, but at the same time, it’s meticulously integrated into its context.

The existing cowshed will house new multi-purpose classrooms. This stable was built in 1958 and defines, to a large extent, the spatial individuality of the current yard of the site. The stable symbolizes the important pioneering work and the exemplary function the farm had in the modernization of agriculture in the region during the post-war period. In the center of the building, the upper floor is cut away at the entrance gate. The new internal vertical circulation gets its place here. 2 external staircases are added at the ends of the building. These allow flexible use of the building. The existing structure forms the basis for the open layout of the plan. Four new glass walls will be installed between the different classrooms. These walls can be opened completely to allow the spaces to work as a whole when necessary.

For the two new buildings, a different strategy was used. A new shed was added to the existing barn. It is built as an open steel structure with two conditioned spaces inside. The materialization of the building forms a strong contrast with the existing barn, but the color, typology, and proportions of the new structure are based on the existing transverse barn. The second new building is called the ‘shack’. It accommodates a wood chip stove. This new building essentially has the same structure as the shed, but it is finished in brickwork. The wood-chip storage is integrated into a chimney-like tower that gives the building a sculptured expression.