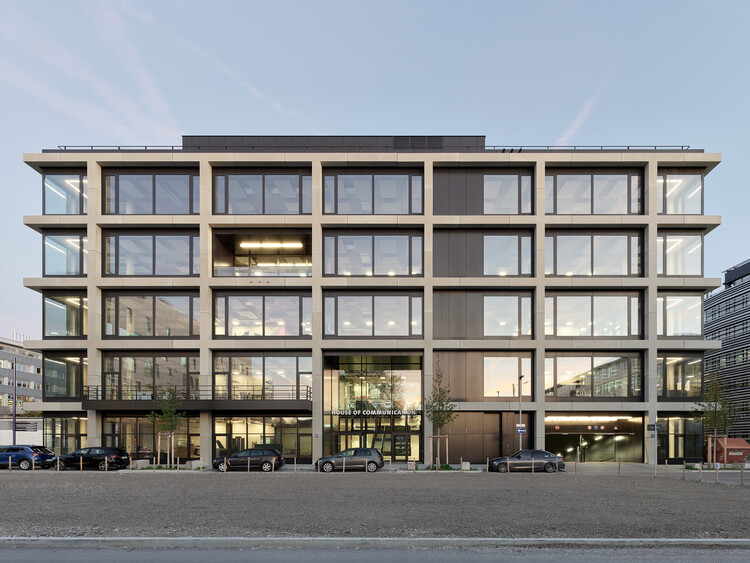 iCampus Munich – vibrant, open, and communicative. For the client Rohde & Schwarz, RKW Architektur + has designed and realized the “House of Communication” – an ensemble of three buildings (i5, i6, and i7), which is characterized by an uncompromising, innovative planning approach: from the inside out. Starting from the social heart in the center, flexible, user-oriented working worlds (interior design: HENN) extend to the facade designed by KAAN Architecten from Rotterdam.

At Munich’s Ostbahnhof station, another building ensemble is opening as part of the iCampus complex conceived by the local high-tech company Rohde & Schwarz. Planned and realized by RKW Architektur +, the “House of Communication” consists of three individual structures connected by a bridge on the 1st floor. Most of its 39,000 m2 will be occupied by the Serviceplan communications agency.

Abstract task as a starting point. The absolute peculiarity of the project is its genesis. When clients and architects met for the first time, not even the specific site – let alone the future user – had been decided. “There was only an abstract task,” says project manager Tanja Frink, associate partner at RKW Architektur +. “We wanted to develop the future, ideal working environment together.” In an almost scientific approach with extensive analyses and research, an initial concept was developed. Diversity and communication as a maxim. Diversity and variety of working life and the overarching possibility of comprehensive communication became the guiding themes of the design.

Completely open, contiguous spaces with great depth and high ceilings offered the best conditions for this. The architects communicated the concept, which was unique in Germany at the time, to the client in an unusual way: On a long-distance trip. “We looked at buildings of this type that had already been realized, for example in London, New York, and Los Angeles. After that, the client was convinced,” says Frink. Developed from the inside out. The result is an innovative building concept whose planning is based on a large atrium as the communicative heart of each building.

The open floors are connected to this center, and in the two outer buildings, large open staircases become internal meeting places and event venues. Tanja Frink: “And everywhere there are opportunities for encounters and visual relationships, across all levels.” In addition, there are various recessed boxes, some of which project into the atriums, which can contain meeting rooms, for example. The three buildings are connected by the so-called Innovation Track, a bridge on the first floor that runs through all the buildings. The middle building is smaller than the outer buildings and contains the employee restaurant on the first floor, with the company’s boardrooms above.

Striking concrete façade. The facade design further enhances the striking character of these buildings. On the one hand, the aesthetics perceptible in the Werksviertel are taken up, brought together, and consolidated; on the other hand, the buildings also develop their own iconic effect when viewed on their own. The deep and rational facade, generated from a protruding concrete frame of sober elements, reproduces the building structure with its large openings and allows adaptation to different future office typologies.

Ready for new work. Because the user decided to sublet parts of a building, one of the three atriums was ultimately given glass walls instead of just parapets made of glass. However, this does not detract from communicative transparency. All in all, an ensemble has been created that promotes diversity from within, stimulates communication, and is regarded as groundbreaking by both the satisfied client and the user.