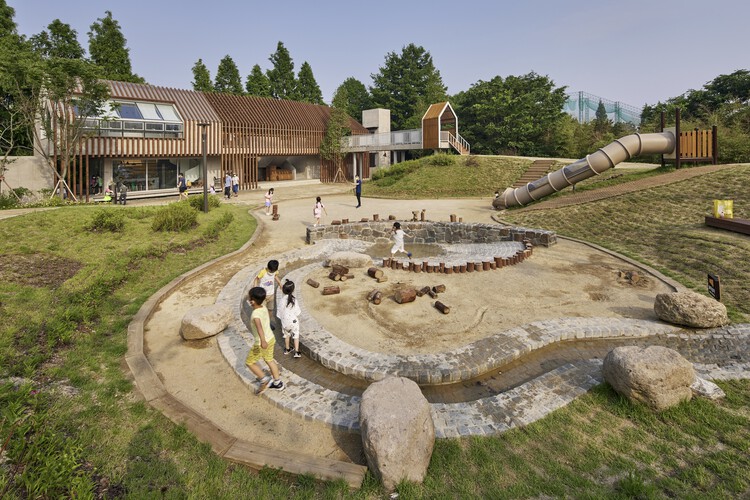 Text description provided by the architects. Mamkkeot house is a project to create a playground without rides where children can run and play to their heart’s content, jointly conducted by Jeonju City, a child-friendly city, and UNICEF. The site is part of Deokjin Park, the central park of Jeonju. About 30 years ago, it was used as an outdoor swimming pool, but the pool disappeared and was neglected for a long time. We once again proposed a space where children in Jeonju City could gather and play.

We wanted it to be a playground, park, and landscaping, rather than a project centered on architecture. So, Mamkkeot house was designed to be perceived as a big play space rather than a building.

The architectural devices that create the play space are gaps and frames. The mamkkeot house minimized the area of the indoor space and made the indoor space feel like an outdoor one. Since the continuous flow of various spaces is important, the area between indoor and outdoor spaces was key to the design. We tried to connect visually and acoustically by creating gaps in the frame and figuring out how to increase movement and flow through the building as much as possible. The gap becomes a space for movement or a space with a volume that can stay. Or, it becomes a space that visually and auditorily passes without any action. The reason why I created a gap is that I wanted it to be a space where children can play in all directions, rather than moving in a unidirectional direction.

The changing gabled timber frame (glulam) defines the form of the building and gives a sense of space. The frame creates an appropriate shade, acts as a handrail for safety, and serves as a support to enable various play activities. The main story of this project is to provide a space where children can freely run around, rather than making a ride such as swings and zip lines.