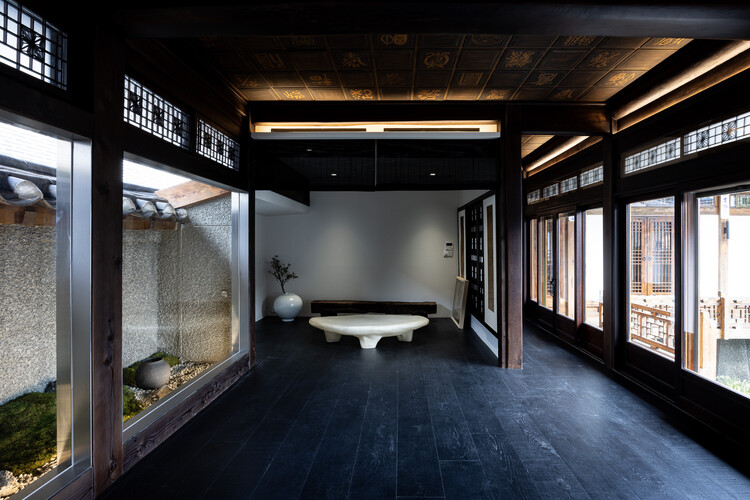 Text description provided by the architects. By 1920, the upper class in Joseon Dynasty largely lived in Bukchon (the northern village), and from the 30’s, as the border of Seoul for administration expanded, Seoul’s urban structure changed to fit modern types as well. Located in Bukchon-ro of Jongno district, this Korean-style house also is produced in the era of 1930s, when collective standardization was made by housing management firms.

To add convenience to modern life, Korean traditional houses in that area were built collectively by using materials such as glass or metal. We, creative studio Unravel took the project of Nostalgia’s Bluejae to renovate it as ‘a place to stay nights’ by preserving the characteristics of each of its Korean-style houses as much as possible, along with that, by focusing the metaphors or meanings and the site of its location, made when small scale Korean-style houses were collectively constructed, led by Mr. Jeong Se-kwon at the times.

Materials in Bluejae have expressed decently thanks to the reflection of moonshine or sunshine and such decent aesthetics were trimmed naturally thanks to its 80 years of history, and its roof tiles of mysterious and subtle blue color are the same as ones made for use in the Blue House for presidents. Gobang glasses (bumpy glass) which highlight their own unique patterns by the integrated technique of that era, and hand-made shaved wood panels in the ceiling of a well, which have different patterns respectively, show timeless nobility. In this regard, we focused on preserving such heritages as a purpose of this design project, and as a result, now Bluejae still considerably maintains its previous textures and shape.