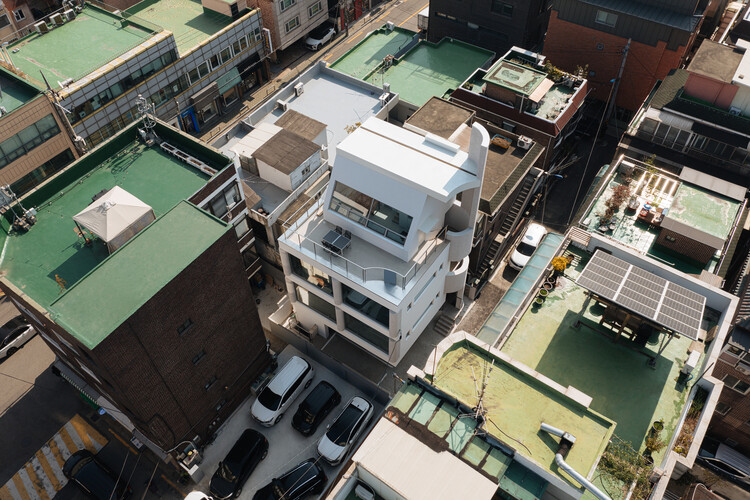 0 Territory Extension of designers’ business – Real estate development by designers: We live in an age when it is common to have multiple occupations. The boundaries between jobs are disappearing, and many people have multiple jobs with different names. It happens in the design industry, too. Studio Stuckyi is a studio where 3 designers who have worked on architectural design and interior design in their own workplaces met together. Each designer has been comprehensively working in designing commercial spaces and brands and has built up knowledge of real estate development from previous workplaces. It felt like a good team to spread into new areas of business. We wondered what is beyond designing the building in the sites requested by clients. If we the designers could plan and build the space for ourselves and then take over the management, would it be possible to create a better space?

Architect, space designer, planner, and operator all at once: We were brave enough to start the project as developers. But as designers we wanted to create a good design, as planners, we had to generate an ample income through rental fees, and as operators, we were worried about what kind of tenants we could contact. If we expand the common use area to create a good space in the design process, the expected rent decreases. We actually wanted to design even smaller parts, but the building had to be a neutral base as much as possible for the various appearances of the store brands which is going to move into the building. There were many worries, but we imagined one specific scene during the project. A scene in which the completed building and the stores located in the building naturally harmonize with each other, and sometimes the pop-up markets open and create a friendly atmosphere for both the operators and the visitors in the well-designed common-use area.

1 Commerciality under closer examination – The reason why the project started here in Mangwon : Visibility. We visited many places in various areas to find the right place, but Mangwon was the first place where all three partners agreed that it would be good. The reason why Mangwon caught our eye is that it has a distinctive feature from other commercial areas in Seoul. Mangwon has the Mangwon Market(a famous traditional market). Just like shops in Mangwon Market, small shops line up on the street which is called mangridangil. As it is a residential area, Mangwon is always crowded even on weekdays. On weekends, visitors come to look around the area known as manridangil. The commercial building, we developed and designed “Reikis” is located on the back side of the road leading from Mangwon Market. However, it is right next to the parking lot of another building, so Reikis is immediately visible on a big road. As it is more recognizable on the big road than on the adjacent road, the elevation on the big roadside is designed as the main elevation of the building and full-wide windows are installed on this side. Through the large windows, customers will feel the space is larger than it is, and people on the street outside can see the inside of the stores with curiosity. You can see people choosing items or sitting at a table and eating, and if it is a gallery, you can see the artwork through the window. In fact, it is currently attracting the attention of people passing through the big road.

A flagpole for a flag: The staircase resembles a flagpole, rising above the roof and into the sky. We wanted the building to be symbolic, like the act of putting up a flag. The flagpole is rounded to wrap around the corners of the building, forming the outer skin of the staircase. The round shape of the flagpole became a design language, applied not only to the staircase but also to the shape of the columns that appear outside. The prominent semicircular shape was finished darker and rougher than the color and texture of the entire building.

2 Design considering various positions – Common use space: entrance and stairs open to the outside: We made the process of entering the building and visiting the store an extension of the road. Sunlight comes in and the wind blows in the staircase that is open to the outside. You can see people going up and down, and when you are going up the stairs, you can see the sky through small holes in the staircase. The hallway connected to the staircase was planned wider than usual because we wanted it to be used like the small garden of stores. We hoped that it would be a promenade with a variety of things to see such as displaying products with decorations and plants, which is showing the characteristics of each store on each floor.

Composition of rental space: combine, separate, or use by ourselves: Mangwon is a town with many small shops. Shops facing Mangridangil are very small. Even 16-square-meter stores are common. There are many small places which are more famous than large spaces, so considering the demand we planned the 2nd and 3rd floors can be divided into two. During the design process, we decided to use the fourth floor ourselves which was cut due to the legal restriction. Although it is a small area of 30 square meters, there are windows on three sides, so it has a sense of openness. The cut side on the 4th floor is the north side but faces the terrace. A window on this side enables physical interaction between inside and outside, increasing convenience. Facing this window, we made a kitchen so that prepared food can be quickly delivered to the terrace for outdoor dining.

3 Space to operate and use ourselves – Building operation after completion of construction: Things that happened after completion were outside of the designer’s area, but for building management, that was the beginning of all work. The process of completing the rental did not go as planned. To fill the space with attractive shops, we contacted our favorite shops, advertised on social media, and provided tours for visitors. In the end, whether it was a coincidence or a taste, the presidents of shops who are the same age noticed the potential of the building and decided to use the building together.

Space rental on the 4th floor: The 4th floor will be used as a rental space. In order to fully experience the charm of Mangwon, we thought we needed a space to spend a long time. We would like to make a space where you can enjoy a lively morning at Mangwon, have a picnic on the Han River with snacks you bought at small stores, and then visit the Mangwon Market and have a barbecue on the 4th-floor terrace. Imagining how guests would use space, we proceeded with everything from the interior design to decorating props to be used. We had to make a balance between a lot of different roles. We constantly talked about where to stop and go further between design and profitability. While considering profitability in every process, it was a unique project that blended in with the craft aspects, such as designing lighting for buildings, building graphics, and pasting signage systems directly.