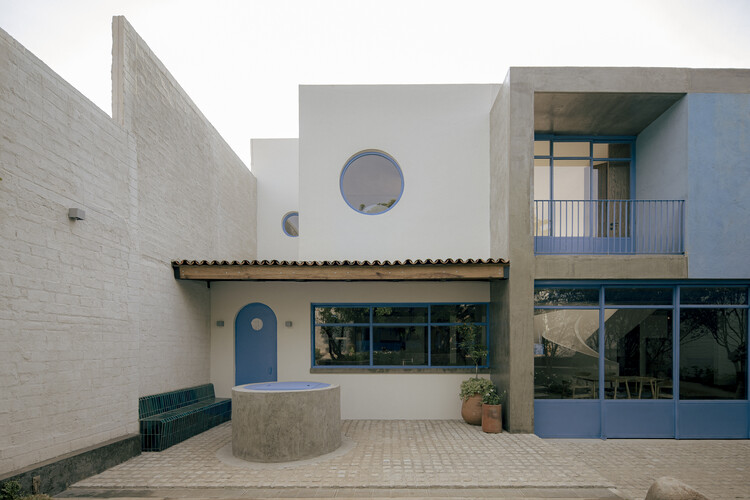 Text description provided by the architects. Casa San Ignacio is in a small town north of Jalisco, México, on a property that used to have the remains of an old traditional adobe house, typical of this part of the state. This project was conceived to create a home that pays homage to this kind of construction, characterized by their clear and solid volumes, lined up to the sidewalk and closed to the outside but still communicating with the interior through a passageway colloquially known as a “zaguán”, which allows for the occasional glimpse inside the house.

The main façade rises to align with the sidewalk, almost completely closed to the outside but provides some dosed openings that confess introspective and intimate inclinations through a concrete lattice and the shutter in the main door. The horizontal surface, which dominates the façade, a light blue tower rises in contrast, dissolving itself within the sky, which corresponds to the color that predominates in the pigmented stucco and the ironwork of the house. The house’s central space is a garden designed around a large existing plum tree, accompanied by a fountain that continuously feeds a stone pond through a channel, generating a soft sound of flowing water that whispers in all areas of the house.

The architectural design is developed into two main cores, in the front are the main spaces for daily usage by the family, and beyond the garden, a large living room with a fireplace that functions as a large-scale entertainment and living area, delimited by an archway with a view of the family’s farm. The rooftop resembles a pot garden, it also functions as a meditative space and allows for open-air coexisting. The material used, such as the brick, tiles, and clay floor, originate from the region, creating a home that coexists harmoniously with its surroundings.