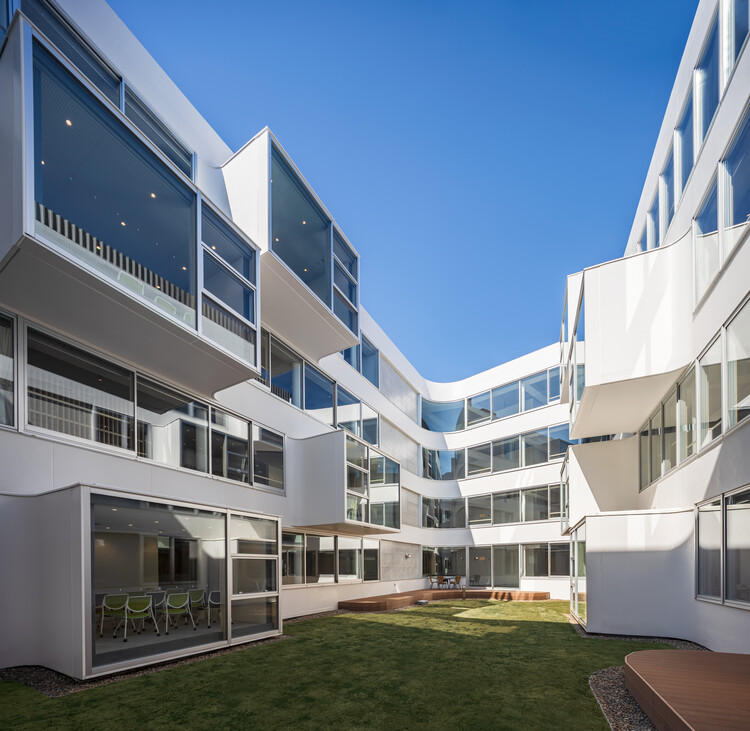 Text description provided by the architects. This international student dormitory with a mixed population of approximately 300 international and Japanese students was established by Toyo University as an SGU (Support for the Creation of Super Global Universities) in promoting internationalization. The site is adjacent to the Toyo University Akabanedai Campus, which opened in 2017, and is located on higher ground from the surrounding residential area. The continuous slope from the campus creates an elevation difference of approximately 4 m within the site, so the layout of the building to harmonize with the topography and surrounding environment became the key planning point.

It was inevitable to consider the external impact (either physical or psychological) of the large student dormitory will have on the surrounding living environment such as shading, noise, and peer pressure. Whereas internally, it was required to create a fulfilling common space where dormitory students can actively interact with each other while improving the efficiency of the plan and maximizing the number of dormitory rooms. Therefore selected was a polygonal plan shape of irregular exterior wall that lines along the site shape. With its longest perimeter length, we have managed to control the feeling of oppression caused by height and wall length at the same time. By opening two lightwell functions in the polygonal plane, the interior was connected in the shape of figure 8, forming a rich common space where dormitory students can gather and socialize.

Shared spaces located throughout the dormitory encourage various scales and types of interactions. As the common area of the entire building, there are study rooms, various studios, kitchen counters, and a cafeteria on the first floor. Living infrastructure such as toilets/showers, washbasins, and kitchens are all allocated in a continuous figure-8 space on the second floor and above. This living infrastructure is shared by 12 dormitory rooms. Study rooms, tatami corners, and small living spaces interspersed in the common space (living room) around the perimeter and courtyard mark a continuous space like a pathway with abundant wind and natural light, which fosters a relaxed community regardless of students’ infrastructure grouping.

In the search for an efficient plan and rich living space-making under site conditions with strict shading restrictions, we proposed a fusion of the advantages of both the traditional dormitory style “private room type” for area efficiency, and the “unit-based type” for group formation. While each group that shares living infrastructure is formed by every 12 dormitory rooms, no distinction or partition was created between groups which enabled for a shared space to encourage interaction over group affiliation by providing free access to the kitchen, study rooms, etc.