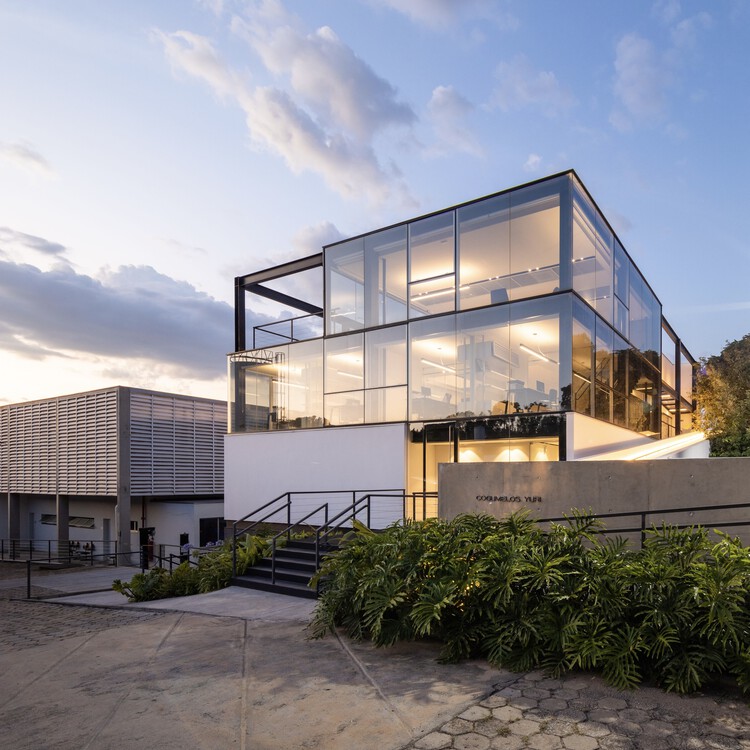 Text description provided by the architects. Yuri Cogumelos is a Brazilian company that brought technology from Japan for growing of shitake mushrooms in controlled environment, replacing the traditional production on tree logs for blocks made of sawdust and bran, which after being bagged, autoclaved and inoculated with fungus, has its production developed in cold chamber with controlled humidity and temperature.

The design for its administrative building began in 2007 together with the other constructions that would be used to increase the production and storage areas. The briefing would be for regular building with office areas and an auditorium for 140 people. Although the design has been provided in 2007, the construction in fact happened in 2019, but with an additional demand. With the expansion of business, the company needed additional cold chambers, which due to the limited space available on the site would have to be built where the administrative building had been planned; therefore, a building with a large cold chamber occupying the ground floor and the administrative areas on the upper floors of the building. The schematic design had to foresee that the operation of the cold chamber would occur before the conclusion of administrative area so that manufacturing area could meet the needs of the industry´s planning.

Observing that the ground floor would necessarily have its opaque perimeter walls and 6 meters high, for the architectural design, the unevenness in the site was used where the access road was approximately 2.50 m above the building implantation level. According to this, it was possible to make that cold chamber could be partially hidden on the lower floor. The main access to the administrative area with its glazed facade and the distinction of base finishing complete the concept, allowing the plastic effect of the cold chamber facade not compromise the general aesthetic effect of the construction.

Although glass is predominant on the facades of administrative areas, on opaque facade at north facing was planned – where the sun has highest incidence – the east facade is partially protected by the treetops and the west side partially protect by the production building and with the forecast of external blinds for the upper floor.

The floor of the offices was designed to work for three kinds of activities. The first one is the regular use of an office area with a central space including a lounge, meeting table and pantry. At other times, this space is used for gastronomy events always linked to shitake. And when the auditorium is used, this area becomes the foyer, also served by PWDS restrooms.

For meet the work deadline, the construction system was planned in steel structure and precast slab. Once the first phase was completed and the cold chamber was cleared for operation, the mezzanine was built with cast-in-place ribbed slab and an exposed concrete wall that separates the administrative area from auditorium and ensures acoustic isolation between the two areas.